In search of Gaelic, my road trip to the Isle of Lewis 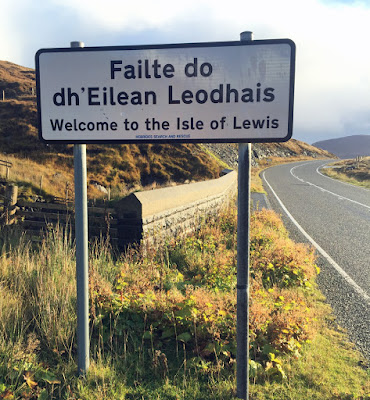 Last week, in an attempt to improve my spoken Gaelic and try and do something about my horrendous English accent, I nipped up to the Isle of Lewis for a couple of days.

Being a bit of a ferry geek, I was keen to take a trip on CalMac's new ferry the Loch Seaforth. Like most folks I have spoken to, I find it smart and swish but full of design quirks that beggar belief. The main thing is the televisions. Gees! There are TVs everywhere! Even in the lounge where you sit with the dog, all the seats face one way and there is even a TV on the wall BEHIND all the seats, so you'd have to crick your neck 180 degrees to even see it.

Not one was showing BBC Alba of course, but full marks for the Gaelic announcements on board.

My accommodation in the village of Achmore (near Leurbost) was at a B&B called Westend, run by Gaelic Tutor and local celeb Maggi (Magaidh) Smith. 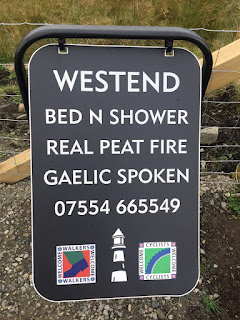 You'll see on Magaidh's sign something I wish other Gaelic-speaking B&Bs would do - be PROUD of the Gaelic spoken! I was welcomed with tea and biscuits and a warm craic in Gaelic. It was then that I realised that I'm not as fluent as I would like to be, but hey. We spoke English when I couldn't cope any more, so don't feel that you need to speak Gaelic if you don't want to. As is the mantra at Sabhal Mòr Ostaig, it is all about just using the Gaelic that you have, no more and no less.

For £30 per night including a nice brekky of fresh fruit, muesli, cereal, and yogurt, it was a nice place to stay. The room was cosy, clean and comfy. It does lack a desk but Magaidh allowed me to use her camping table in the laundry room. Wifi ('island' speed) is included. OK for basic browsing, but don't try and download anything. 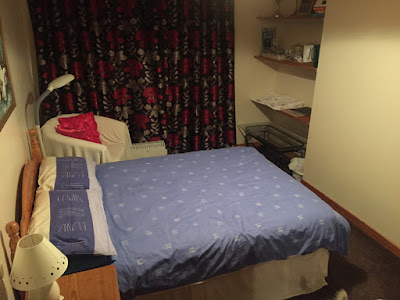 The new, immaculate shower room and WC is directly across the hall, and as this is the only guest room Magaidh has, you have exclusive use.

Like many islanders, Magaidh has about 395 jobs on top of all the charity and voluntary work she does. Conversation opportunities were limited to breakfast, and a chat in the evening - pretty much the same as any B&B host. However, for an additional fee you can book her for an hour or so if you need to go through anything you're stuck on. It's definitely worth calling for a chat first if you are coming here on an informal language break.

Most of my Gaelic conversation was with friends that I had met beforehand. However, one evening Magaidh was running a wee cèilidh in Stornoway and I was invited to that. Sadly, there was limited opportunity to speak Gaelic as most of the native speakers spoke to me in English as usual.


All in all I had a nice time and enjoyed my autumn break on the beautiful Isle of Lewis. Every time I visit Lewis, I fall in love with it just a little bit more.

As for the Gaelic, you will get nowhere near as much from such a break as you would from a short course at Sabhal Mòr Ostaig - here there is far more of the  'holiday' element. However, you'll get a stack more opportunity to use what Gaelic you have by staying here with Magaidh and being introduced to local folks than you would by staying in an impersonal hotel. 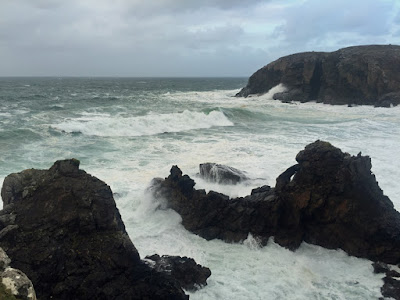 Come out of the closet! 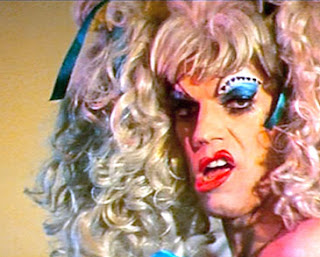 'But...but why son? Was it something we did? I KNEW we should never have had that holiday in Barra in 2009.'

'It's just the way I am. I've been surpressing it long enough, and I can't hold back any more. I'm Gael.'

Mum dries her eyes. 'I should have guessed. You left your computer on once and I saw you'd been looking at dirty websites like learngaelic.net. I've heard you listening to 'Beag Air Bheag' podcasts through your headphones. I even found those disgusting magazines under your mattress. Yes, those Sabhal Mòr Ostaig course notes and prospectuses from those 'weekends away' when you pretended you were going to the city with your mates to get off your face on booze and drugs and end up in trouble with the Police. But they were all lies weren't they? You were sneaking off up to weekend schools in Skye, learning the Gaelic, playing the fiddle, reciting poetry, singing songs and other such disgusting behaviour. How could you? HOW COULD YOU?'


OK, so this is all a bit tongue in cheek, but I'm prompted to imagine this scenario by two separate thoughts.

First off, it's to help my own understanding of why someone from the South East of England feels such a strong affinity with the Highlands and Islands, and Gaelic, despite the lack of roots. Well, sometimes strength of feeling cannot be explained logically, it just IS. Think of the men and women 'trapped' in the 'wrong' bodies. Transexuals are often ridiculed, but I for one think that you'll not find a a stronger and a tougher band of people. These folks have such a strong feelings from within that they are prepared for the mental and physical battle that lies between the gender that they are born with and the gender at which they will finally be at peace. As someone who is very happy in my own skin, I don't really understand it, but that doesn't mean to say I don't respect and admire these folk. Live and let live and celebrate diversity.

So while I'm happy with my skin and who I am, I often feel like there is a Gael deep down inside me busting to get out. I don't understand it, but am taking on the tough battle to let it out. Thank goodness I don't have to go through painful surgery or psychological analysis.

Just like the transgender man living as a woman before the operation has to endure the jibes and sneers of the mob, the Englishman learning Gaelic has to endure the thinly-veiled racism of the anti-English brigade. References to the 'Auld enemy,' 'the Bad Side of the Border,' and far, far worse will always serve to remind me that I am alone in a place where people hate the place where I was born and brought up. Yet, rather than give it all up, us English folk learning Gaelic just have to shoulder it and get on with it. Yes, there are many aspects of English Culture, History, and Politics about which I am deeply unhappy, but that doesn't make me as an individual responsible for any of them. As for History... well, so much of that is placed in a romantic light by dreamers who forget about one crucially important factor, and that is context. Dreamers and romantics refer to historical events in a modern-day context, which skews fact and interpretation.  Do I hold my German friends accountable for the destruction of my corner of the country and the loss of life 100 and 75 years ago? No. Do they hold me accountable for Dresden and the like? No. We shall never forget, but we shall also move on.

As for 'coming out of the closet,' it still amazes me how many Gaelic speakers hide their language and culture. Of course, Gaels are notoriously polite, decent, and modest folk, and their lack of arrogance and selfishness is one of the main reasons that I find the whole culture so utterly amazing and wonderful. However, this in itself brings additional challenges for the learner.

Let's look at our friends in the Gay Community. A generation or two ago, even the most placid and peaceful men and women were faced with no option than to be vocal and visible. It was the only way to get their rights to be who they are accepted and integrated into wider society. There is still some way to go, but things are moving in the right direction. A generation or two ago, if a train driver announced he was gay in the messroom it could have ended in his being ostracised and cut off, excluded and lonely until possibly he ended up on a downward spiral. I say 'he', because women didn't drive trains then. Nowadays, if a train driver announced that he or she was gay, it would be about as exciting and controversial as what was on the menu at the staff canteen.

What has this to do with Gaelic? Well, there is just so much of it in the Closet, and that makes it difficult for the learner and the would-be learner to find it being used in everyday life. Bigots will always put down minority groups because bigots are ignorant, and ignorance promotes fear. Ignorance means that they don't understand it so they try to kill it. When cultures and lifestyles are dragged out into the open and life doesn't end because of it, ignorance gradually fades.

Right now, the only way for somebody to learn Gaelic as an adult is to do it through some kind of a course. Ùlpan is the least academic course, but these courses are few and far between, and they never seem to be consistent or structured in their occurrence. The only clear courses with a clear progression path are the academic ones, at Sabhal Mòr Ostaig in Scotland and a few other colleges and universitites in the UK.

However, on social media I have been following a few Gaels who are disparaging towards the 'academic' approach to Gaelic. It's true that when you're at Sabhal Mòr, you are surrounded by people who have the time, brain power, and financial means to devote to an Academic Course. It is a luxury not everyone can afford, and in a chat with other students, we voiced concern that Gaelic is becoming a Luxury Language for the Middle Classes.

But what are the options, when Gaels refuse to speak Gaelic outwith people they know?

I am on a bit of a personal mission to find Gaelic outside the classroom. I have searched for homes or farm stays where guests can stay for a week with a Gaelic-speaking family and pick up what they can. So far, I have not found any such thing. I am sure that there are many farms, B&Bs, cafes, and other social places where Gaelic is spoken, yet this fact is never advertised. Just like some places are 'Bikers Welcome' or 'Walkers Welcome', howabout a scheme where 'Gaelic Spoken' is used in marketing? It would make life a lot easier for us intermediate learners who are looking for opportunities to consolidate all those words and grammar that's jumbled about in our heads into real-life sentences outside the classroom.

I have found one - just one - B&B where Gaelic is not just spoken, but it is promoted. That B&B is on the Isle of Lewis, and tomorrow I will head on up there to check it out. When I phoned to book and spoke Gaelic to the landlady, she never once reverted to English, even when I struggled. Now THAT is the kind of thing I'm looking for! Stay tuned and I'll tell you how it goes.